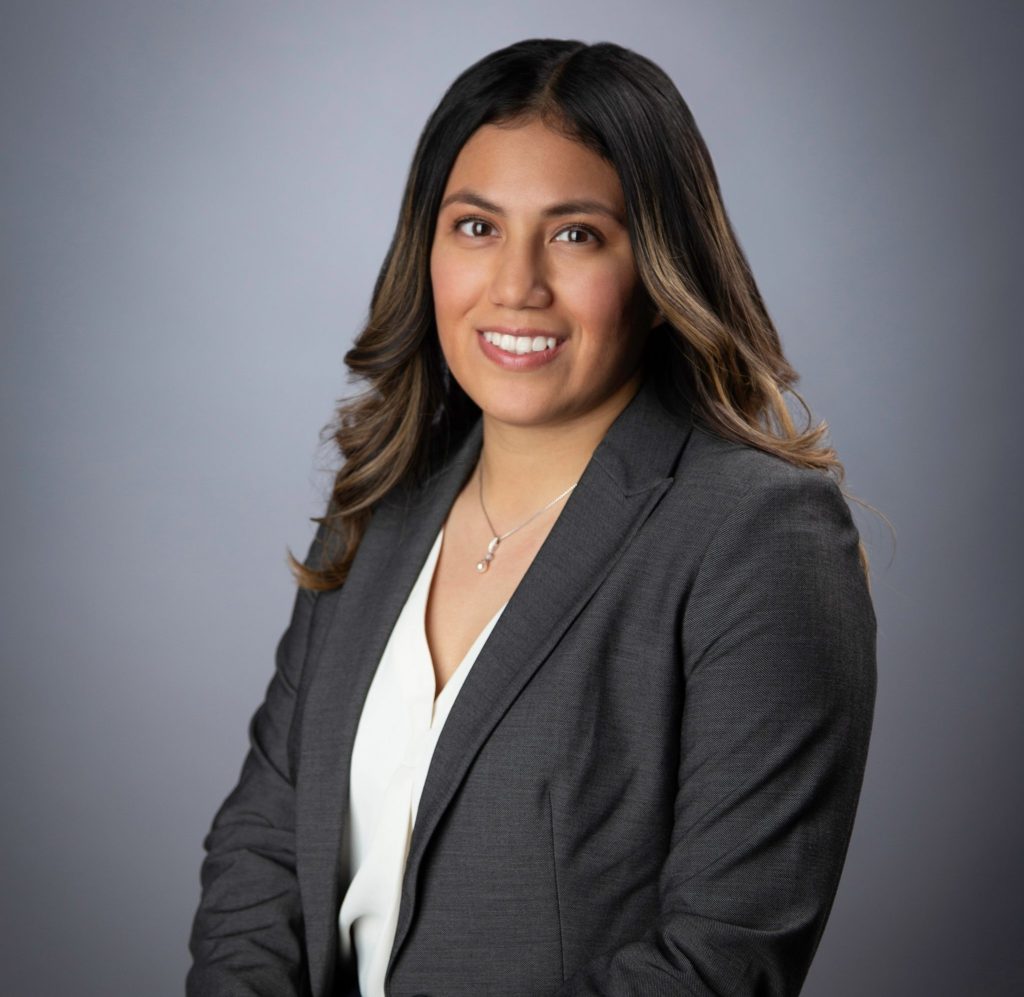 Sharon P. Ramirez is an attorney at Law Office of Kenny S. Ramirez, based out of the Inland Empire. Her areas of practice include personal injury, wrongful death, catastrophic injury, sexual assault of minors, premises liability, government entity liability, employment, products liability, and medical malpractice litigation, all on behalf of plaintiffs.

Prior to working at Law Office of Kenny S. Ramirez, Sharon studied law in Los Angeles and gained legal experience working at a nationally renowned plaintiffs law firm in downtown Los Angeles. Shortly after graduating law school, Sharon was able to begin her legal career in the Inland Empire, where she grew up. Sharon is based out of the Inland Empire yet represents clients all throughout Southern, Central, and Northern California.

Sharon manages an active caseload and has been instrumental in obtaining settlements in the five, six, and seven figures.

Sharon graduated from Los Osos High School, located in Rancho Cucamonga, CA. While in high school, she played basketball for four years, and was on the Varsity girls’ team during her Junior and Senior year. Notably, Sharon scored a career high of 41-points, received the team’s Most Valuable Player award her freshman year, and while a senior was elected by all league coaches as a member of the 2014 Second Team Baseline League.

Upon graduation, Sharon attended the University of California, Irvine. There she received her Bachelor of Arts in Psychology & Social Behavior and Bachelor of Arts in Criminology, Law, and Society. While at UCI, Sharon was actively involved in the School of Social Ecology, serving as a mentor and then program coordinator for the ACE Social Ecology Program, a program focused on assisting and supporting first-generation, low-income students by providing mentorships as well as focusing on academic excellence, leadership development, and community engagement. For her work in the ACE Social Ecology Program, Sharon received the award for Outstanding Contribution to the School of Social Ecology. Sharon was also a student advocate for the UCI Dreamers Advocate Program, which focused on raising campuswide awareness on immigrant rights issues.

Sharon received her Juris Doctorate, with a concentration in Civil Litigation Advocacy, from LMU Loyola Law School in Los Angeles. While at Loyola Law School, Sharon served as Co-President of La Raza de Loyola, alongside her other brother, Brandon, both of whom attended Loyola Law School together. Sharon also served as Co-Lead Coordinator of the Young Lawyers Program, a trial advocacy mentoring program for high school students in the Los Angeles area where youth learn trial skills and participate in a mock trial, and are exposed to the benefits of continuing their education beyond high school. Each year, over 100 high school students and law students participate in the program. For her work in the Young Lawyer’s Program, Sharon received the 2022 Dean’s Service Award. Sharon was also on the Loyola of Los Angeles Entertainment Law Review, as a Staffer and then Note and Comment Editor. Further, Sharon served as a student ambassador for the Office of Admissions, and Loyola Student Co-Vice Chair for the renowned Mexican-American Bar Association (MABA).

While at Loyola Law School, Sharon clerked at The Cochran Firm, the national firm founded by the late Johnnie Cochran. During her time at The Cochran Firm, Sharon was integral in the handling of various catastrophic injury and wrongful death cases, including drafting mediation briefs, demand letters, complaints, discovery matters, and assisting with pre-trial matters. Sharon also prepared and took depositions as a certified law clerk; all while still a student in law school. In addition, Sharon was a certified clinical student for the Loyola Juvenile Justice Clinic where she zealously represented children and adolescents in juvenile delinquency court.

Sharon was born in Pasadena, CA and raised in the Inland Empire. She is the child of immigrants and is grateful for the sacrifices her family has made. Such sacrifices have provided opportunities that would not have available to her in parent’s home country. She is honored to be the third child and first woman in her family to pursue higher education and a legal career.

When Sharon is not fighting for her clients, she enjoys spending time with her family. She loves her siblings – Kenny, Brandon, and Chelsea. She is honored to be part of the legal profession with Kenny and Brandon, and is deeply proud of Chelsea, who is pursuing her master’s degree at the University of Southern California (USC) film school and aspires to become a film director. The entire Ramirez siblings credit their journey and success to their parents, who raised their children with an emphasis on God, family, education and service.

Sharon is passionate about education and loves encouraging students to pursue higher education, both with words and actions.

Sharon is also an active member of her local church, where she serves as the director of multimedia production, and assists with the young adult and youth ministry. Sharon also enjoys serving on missionary trips to Guatemala.

We Give Your Case the Attention it Deserves

Fill out the form below or call our team to receive your Free Consultation.